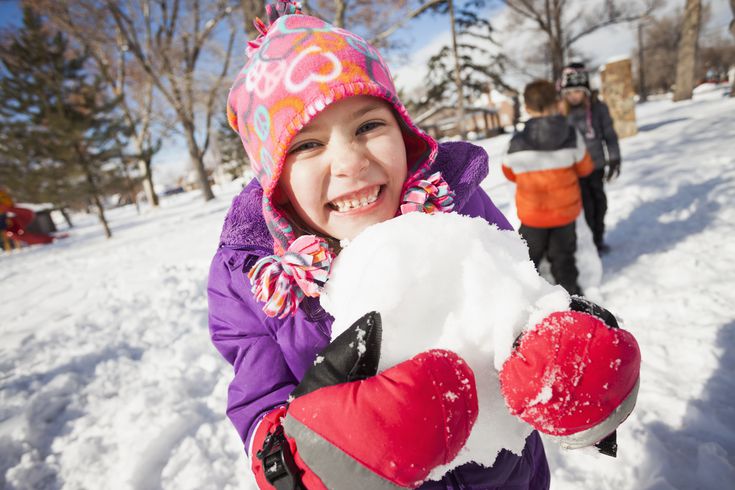 Snow angels and sledding are a given, but there’s so much more to snow play! Whether or not it nets them a snow day off from school, a big snowfall is an awesome opportunity for kids to play outside actively. They still need their 60 minutes a day of physical activity no matter what the weather is (and remember, that’s just a minimum). So take advantage of their enthusiasm for the snow to help them get some good exercise.

Snow offers resistance and weight, so moving it, pushing it, and building with it helps build kids’ muscles and bones. And sliding on it gives a glorious sensation of speed and risk, which benefits kids too.

So it’s worth it to bundle kids up and out the door when it snows.

To protect them from the elements: Kids should wear layers of lightweight clothes underneath a warm jacket, plus waterproof gloves or mittens, sturdy snow boots, and a hat that covers their ears. They should also wear sunscreen on exposed skin on their face. If they’re trekking to a friend’s yard or nearby park, have them bring extra mittens, and maybe even a travel mug of hot cocoa. If they begin shivering, or start to experience pain in extremities or exposed skin, it’s time to come inside and warm up.​

Many of these snow activities for preschoolers will still appeal to bigger kids too. But you can also try these more challenging options:

“Packy” just might be the highest praise a kid can give when it comes to snow. Send them out to play in the white stuff. If you hear “It’s packy!” then you know they’ll be busy for a long time, because the snow will stick together in piles, bricks, balls, and more. If kids need a suggestion, prompt them to try building:

Snow sculptures, from snowmen and snow animals to snow furniture or snow dinosaurs. Embellish with twigs, vegetables, mittens that have lost their mates, old hats, and so on.Ice sculptures, by freezing blocks of water in milk cartons and then stacking or arranging them. Experiment with layering in pine needles, seeds, fallen leaves, or other natural objects, or using colored water. Starting with boiling water yields clearer ice blocks (adults should pour the hot water).Snow molds, using buckets, sand toys, kitchen containers and more to create shapes that can be added to sculptures or displayed on a railing or wall.A snow fort, or even more ambitiously, an igloo or snow houseThe biggest snowball they can muster

The extra benefit of these snow projects? They encourage kids to work together to craft bigger and better creations.

Kids can play almost any game of tag in the snow (it’s an extra workout to slog through the white stuff wearing heavy boots!), but freeze tag seems especially appropriate. Select one or two players to be “it” and define boundaries of play. When they say “Go!”, other players should run away. Anyone who gets tagged must freeze. They can be freed by other players who haven’t been tagged.

Footprint tag: The basic game of chase—except players must step only in others’ footprints, not on fresh snow.Winter tag: Stamp down the snow to make narrow lanes crisscrossing the play area. Only the player who is “it” can jump from one path to another as she tries to tag the other players. They must stay in one lane.Follow the leader: Create a course with big snowballs or other obstacles that players must jump over.Cross-country sledding: Instead of hurtling downhill, sled on flat ground by pushing the sled along with hands and feet. Make it a race or see who can travel the furthest distance.Hide and seek: Instead of having kids hide, play scavenger-hunt style by hiding colored ice cubes, plastic eggs, or glow sticks around your yard. (Or if you don’t want to do the hiding, designate one kid to hide everything first. Once everything is recovered, have another child pick out the hiding places while the others close their eyes, and so on.)Snowshoeing: Hit your favorite trails and parks with snowshoes on. You will be amazed at how easy it is and how far kids can go (and many nature centers and ski areas offer inexpensive rentals, too). It’s a workout, but not as challenging as cross-country skiing.Kickball: Dig out a lane from home plate to the pitcher’s mound and you can play kickball in the snow just like you do in the summer!

Kids who could care less about baseball will still want to throw snowballs! To keep them from hurling icy projectiles at each other, set up targets and challenge kids to hit those instead. A target could be a designated tree, a hula hoop propped up against a wall, a box chalked on the side of the garage, and so on. You could even drag out your cornhole set and toss snowballs instead of beanbags, or create a Tic-Tac-Toe board in the snow and play a game. Use sticks or pinecones as markers, or spray with colored water.

Or, you could introduce kids to the Native American tradition of “snow snakes,” in which players carve snakes out of long strips of wood. They then take turns throwing the snake down a long trough carved into the snow. The course can be well over 100 yards long, with twists, turns, small hills, and valleys. (It’s made by dragging a log over the snow).

Real snow snakes can be several feet long, but you could approximate this game at home by using small sticks, stripped of twigs and leaves so they’re as smooth as possible. Use your foot or a snow-filled bucket to create a course. You could even spray the inside with water to make it more slippery.

When Should You Call Your Pediatrician?