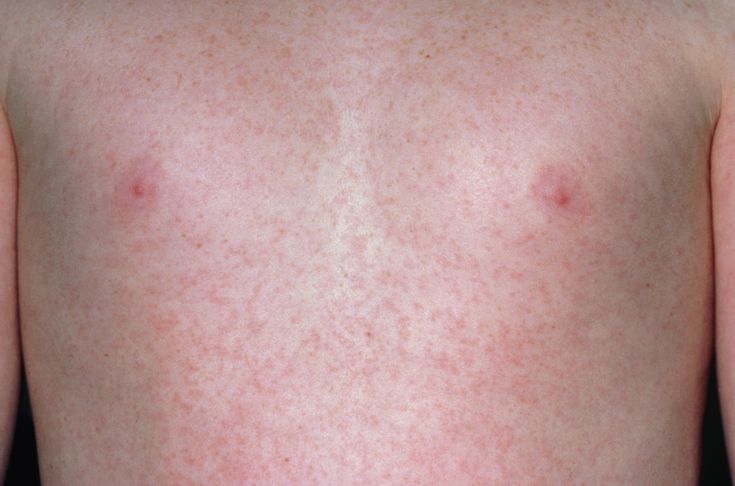 Rubella is also known as ‘German Measles,’ as German doctors in the early 1800s were the first to discover that it was actually a different disease from measles.

It took another 100 years for experts discover that rubella was caused by a virus, and it wasn’t until 1941 that it was no longer thought of as a mild childhood disease. That was when rubella became linked with congenital rubella syndrome.

Will Getting the MMR Vaccine While Pregnant Hurt the Fetus?

In general, rubella does cause very mild symptoms in most children.

About 14 days (incubation period) after being exposed to someone else with rubella, children who aren’t immune may develop a maculopapular (small spots) rash that starts on their face and then progresses down to their feet.

The rash of rubella has some characteristic features that help to distinguish it from a measles rash, including that the rash is fainter, the spots don’t join together like they do with measles, and these children generally don’t have a high fever.

The rash lasts about 3 days and may be more noticeable after your child gets overheated, especially after a hot bath or shower.

Although rubella is only considered to be moderately contagious, it is when you have a rash that you are most contagious, spreading the virus via respiratory droplets and secretions.

In addition to the rash, children may develop lymphadenopathy (swollen glands) in the head and neck area.

This may begin up to a week before the rash appears and can linger for several weeks.

While rubella is typically a very mild disease, it can rarely cause complications, especially in adults.

Rubella complications can include a life-threatening encephalitis, low platelet counts and vascular damage leading to brain, gastrointestinal, and kidney bleeding, neuritis, and orchitis. Like measles, rubella can also rarely cause a late progressive panencephalitis.

Tragically, rubella complications are far from rare when a woman becomes infected early in her pregnancy, leading to congenital rubella syndrome.

As the rubella virus can infect all of the organs of a developing baby, complications can include:

There is no specific treatment or cure for rubella infections.

For infants born with congenital rubella syndrome, treatments depend on the specific birth defects that the baby was born with, and might include surgery for cataracts and heart defects, and hearing aids, etc.

One of the biggest outbreaks of rubella and congenital rubella syndrome in the United States occurred from 1964 to 1965 and resulted in:

This outbreak was not limited to the United States. It was a pandemic that had begun in Europe the previous year.

As expected, cases of rubella and congenital rubella syndrome quickly fell as the first vaccine was licensed in 1969. The rubella vaccine was later combined with the vaccines for mumps and measles in 1971 when the MMR vaccine was introduced.

Coinciding with measles outbreaks, there were a number of rubella outbreaks in 1990-91, leading to at least 2,526 cases of rubella and 58 cases of congenital rubella syndrome.

A booster dose of MMR and rising vaccination levels helped to decrease rubella cases once again.

While we don’t see big outbreaks anymore, it is important to note that rubella isn’t totally gone:

As with other vaccine-preventable diseases, rubella and congenital rubella syndrome are also still big problems around the world.

The World Health Organization estimates that over 100,000 babies are born with congenital rubella syndrome every year.

There have also been outbreaks in:

Although rubella is a vaccine-preventable disease, these cases continue to occur among mostly unvaccinated people when a vaccine is available. And as we repeatedly see, this can lead to an increase in neonatal deaths and cases of congenital rubella syndrome.

What You Need to Know About Rubella

Other interesting facts about rubella include that:

an ophthalmologist in Australia in 1941, Dr. Norman Gregg, first linked the rubella virus with congenital birth defectsthe incubation period of rubella can range from 12 to 23 daysup to half of people with rubella don’t have any symptoms or any obvious symptoms, although they can still be contagious to otherspeople with rubella may shed the virus, and be contagious, for up to 7 days before and after the rash startsantibody tests can determine if someone has rubella or if they are immune after vaccinationrubella outbreaks occurred each spring, but with much bigger 6- to 9-year epidemic cycles, which have been broken by fairly high vaccination rates in the United States, leading to the elimination of rubella in 2004maternal rubella antibodies are only protective for about two months, much shorter than maternal measles antibodiesa single MMR vaccine is about 97 to 98% protective against rubella

The elimination of rubella and congenital rubella syndrome in the United States has been a great vaccination success story. But rubella has not been completely eradicated.

Of the six cases of congenital rubella syndrome reported between 2004 and 2011, at least five of the cases involved pregnant mothers who were infected with rubella outside of the United States.

Get Educated. Get Vaccinated. Stop the Outbreaks.

Protein-Rich Foods Your Kids Will Enjoy